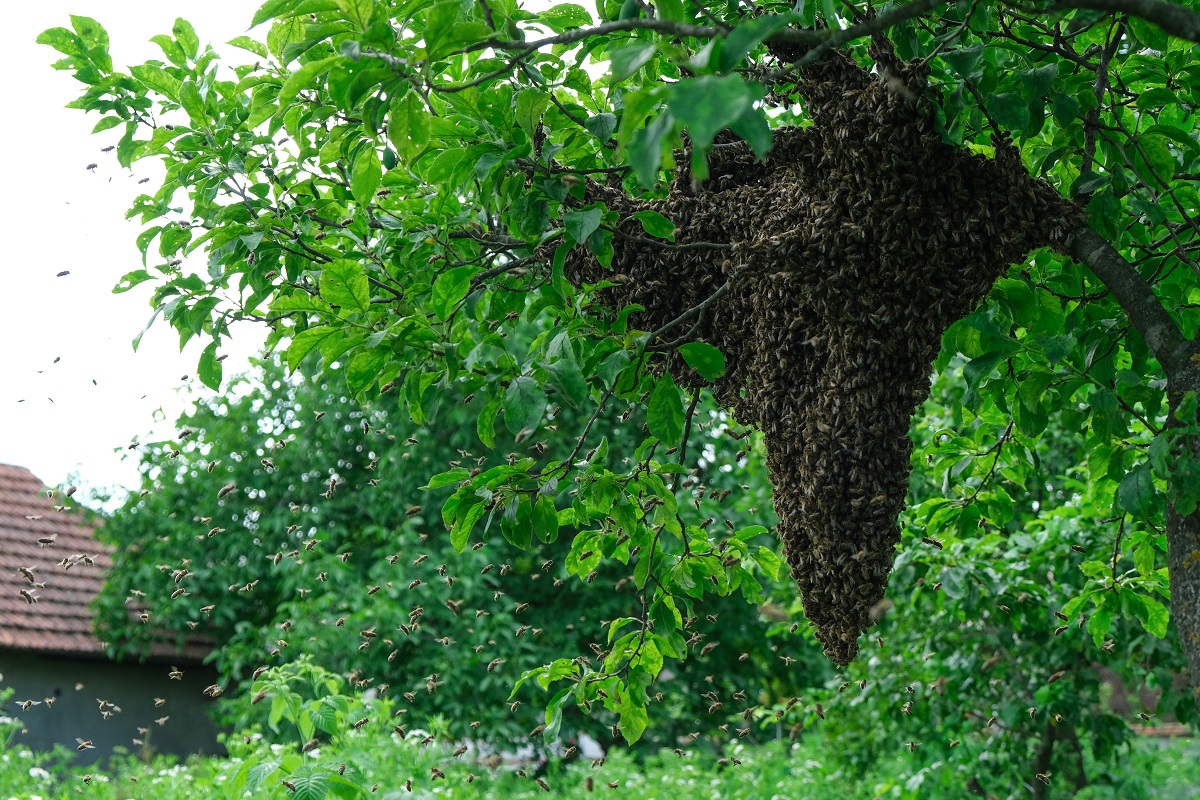 Mid-March to early July is the typical bee swarming season in the United States. During this season, bees begin to collect pollen to feed and store for the coming winter.

During the swarming season, the beehive becomes overcrowded. Consequently, it splits into two colonies. This move puts many homeowners at risk of getting unwanted swarms. Swarming bee colonies look for suitable nesting areas-sometimes they can be your home.

What is bee swarming

When the bee colony splits, the new queen stays with the existing hive, and the older queen recruits a few female worker bees and several male drones in the process of finding a new home. This newly formed group is called a swarm.

The swarm will leave their hive and may gather on branches, shrubs, or other objects, while some bees selected as scouts look for ideal nesting sites in the surrounding area. A swarm around or in your property can cause damage.

The swarm of bees may rest for a while and move on. But if they feel it the right place they will declare your property as a permanent nesting site.

After the scout bees have inspected the surrounding area, they report their findings to the swarm. The scout bees will perform a waggle dance to convey the direction and the distance of the new home.

Remove bees to protect your home in Orange County

Bees can enter any object or structure that contains a quarter of an inch or more of holes. A common anti-bee strategy is to use durable materials such as metal screens and grouts to seal all possible bees.

However, once a colony of bees appears on your house, you may not have enough time to identify and seal all possible bee entry points.

A practical alternative is to treat scout bees wandering near your home. This will prevent the scout bees from notifying the colony of potential nesting sites. As a result, the group moves to another location. But the trick is to act quickly because bees will move suddenly.

Reducing clutter from your surroundings can also prevent bees from nesting in your yard. Unused utensils or lawn equipment in the yard can attract bees because they provide ample shelter for the hive to allow them to reproduce.

The truth about Africanized “killer” bees

Africanized bee (AHB) colonies have been identified in 11 different states. The latest discovery of this bee is in Colorado. European honeybees are the most common type of bee in the United States, but African bees are still recognized in new areas. Usually, only one isolated colony is found in more common areas.

In October 1990, the first known Africanized colony entered Hidalgo, Texas, USA. These bees are part of a hybrid breeding program that creates hybrid bees that make them more suitable for survival in tropical regions. This bee is better able to defend its hive and swarm more frequently, which helps pollination.

AHB is virtually indistinguishable from European bees, except that it behaves differently. They are more susceptible to attack, and although both species have the same virulence, African bees attack in large numbers when in danger. Although these bees are more aggressive, they rarely attack humans.

However, treat each beehive you encounter as an African colony to prevent yourself from being stung.

Why do bees choose my home?

Although proper shelters and previous bee problems can be the leading cause of beehives in your house, it is not very easy to determine the specific attractant. Other reasons may include favorable microclimates or rich vegetation, as bees prefer to be close to food sources.

A recent analysis of beekeeping in southern California has determined which areas are most vulnerable to bee problems. Coastal towns (typically weather-related) with milder climates, and cities closer to rural areas and farmland (vegetation selection) seem to be more prone to bee colonies that need to be migrated.

It is better to ask for assistance from expert bee removal professionals in Orange County.

The places where bees choose to live are usually beyond your control. Do you notice some bees in your home but no hive? If that’s the case, your home is more likely to become an unwanted bee colony in the future, so be sure to take precautions with the help of the bee removal services in Orange County such as that of The Bee Man. Call them up at (949) 455-0123 today.