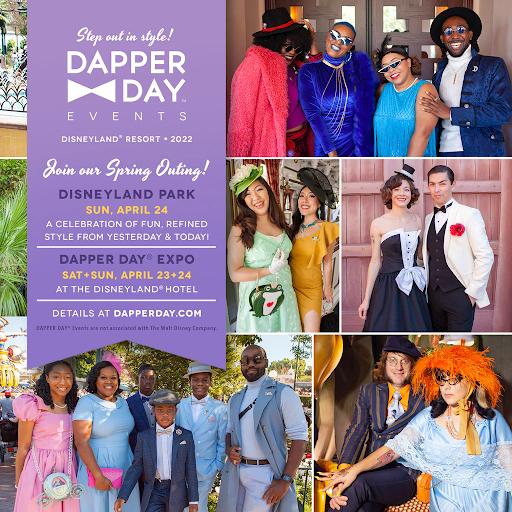 If you have ever been around the Disney Parks fan sphere, then you may have heard of Dapper Day. If not, then this post is for you. Is it an official event held by Disney? Actually, no. It was started in February 2011 by Justin Jorgensen. The next Dapper Day Expo is scheduled to be held on April 23rd and 24th at the Disneyland Hotel. This will be the first in-person Expo to be held since 2019. They are also held over at Walt Disney World in Florida and all the way over at Disneyland Paris. But what exactly is the point of these Orange County events, and why do people participate in them? Let’s find out!

If you have been to Main Street in either Disneyland or Walt Disney World’s Magic Kingdom, then you might already know about the Dapper Dans. Walt Disney himself based Main Street off of his childhood home in Marceline, Missouri, during the 1900s. If you ever found yourself feeling envy over their clean outfits, now is your chance to be inspired by them! Dapper Day is held twice a year, typically during April and November. During these special days, park guests will dress up like they are living in a previous time period, most notably the 1900s to the 1950s. People are serious about Dapper Days and Dapper Expos; some even getting their hair styled by a professional just for it!

The Expo is full of awesome retro sights, including old school cars that your grandparents likely rode to school in, bow ties, and outfits that you can add to your wardrobe at home? Who knows? It may even be useful for any parties or events you attend outside of Disney. Perhaps it could make a great costume for next Halloween or a theme for a birthday party!

There are plenty of ways that you can put together your own Dapper Day outfit. Here are just a few ideas:

Dapper Day even has its own official website. There, you can purchase tickets to attend the Expo and outfits to wear to the event, and other merchandise, including pins and books!

Dapper Day is a great opportunity to show off your personal style and have some fun. Allow yourself to transport into a different time before on-demand entertainment and food delivery for a single day. So if you’re planning on attending, be sure to grab your family or friends to come along with you! We hope you have a blast at one of the most spiffy Orange County events there is!

This blog is brought to you by Toyota of Orange, your dapper Toyota dealer near Tustin.