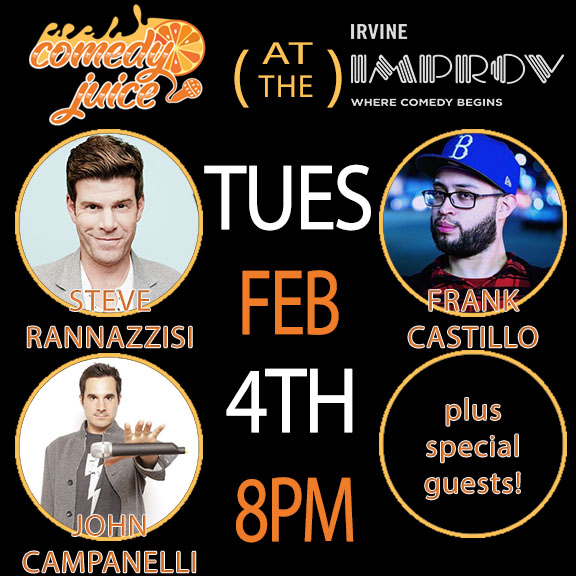 If you’re looking for Orange County events to go to, this free comedy show at The Irvine Improv will have you in stitches.

Featuring Steve Rannazzisi, Frank Castillo, and John Campanelli, Comedy Juice is a comedy show that comes back every week, but not always for free.

It showcases some of the funniest comedians around and certainly among other Orange County events! You’ll see people that are featured on TV shows every week, like: Chelsea Lately, Saturday Night Live, Conan, Letterman, Showtime, HBO, MTV, Showtime, Comedy Central and more!

Not only that, but almost every Comedy Juice show has BIG special guests.  Not many Orange County events have talent like this. Some recent names are Joe Rogan, David Spade, Nick Swardson, Daniel Tosh, Dave Chappelle, Sarah Silverman, Chris Rock, Craig Robinson, and Sarah Silverman!

For more than 13 years, on stage and screen, Steve Rannazzisi has made people laugh. At the moment, Rannazzisi writes and stars alongside Mark Duplass, Katie Aselton, Jonathan Lajoie, Nick Kroll, and Paul Scheer on the incredibly popular FX series comedy, The League, produced by Jackie and Jeff Schaffer. In the show, Steve plays “Kevin McArthur,” who is the commissioner of the fantasy football league on the show.  The League is in its 7th and final season which will air Wednesday’s at 10 pm on FX’s sister station: FXX.

Growing up in San Jose, CA, Frank Castillo was from a young age very interested in comedy. Frank quickly began working up the ranks at the prestigious LA venue The Comedy Store.  He became a regular at The Roast Battles of The Comedy Store and in January 2017, Frank won the right to call himself Champion for Comedy Central’s Roast Battle II. Frank enjoys Burritos, Taco, Hash Browns and Ketchup.  And it may go without saying that Frank is a proponent of Marijuana Rights. He currently tours all over the US making people laugh and opening for Erik Griffin.

Born in New York and now based in LA, John Campanelli is a hot and upcoming comedian.  He was featured recently on the comedy tour: WestJet 2016 Just For Laughs headlined by Dane Cook. He also was featured at the Beacon Theater in the Cook in the New York Comedy Festival.

John’s first comedy album “Nervous,” is very popular as well!  It was recorded at NYC’s The Stand Comedy Club, and LAFT Magazine reviewed him: “A comedian for the people.”

This is one of the best Orange County events that you don’t want to miss!

Anyone attending MUST arrive by 7:30 pm.

Note that the Guest List works on a first-come, first-serve basis, so an RSVP does not guarantee admission.

To guarantee your seating it is best to purchase your ticket.

Like some other Orange County events, this show is 18+

And as always, be sure to visit nearby Fullerton car dealerships when you’re in the area!

From Vision to Action – One Of The Best Orange County Events To Grow Your Business!
Challenge Your Skills At The National Puzzle Day